1919 The Doom That Came To Sarnath 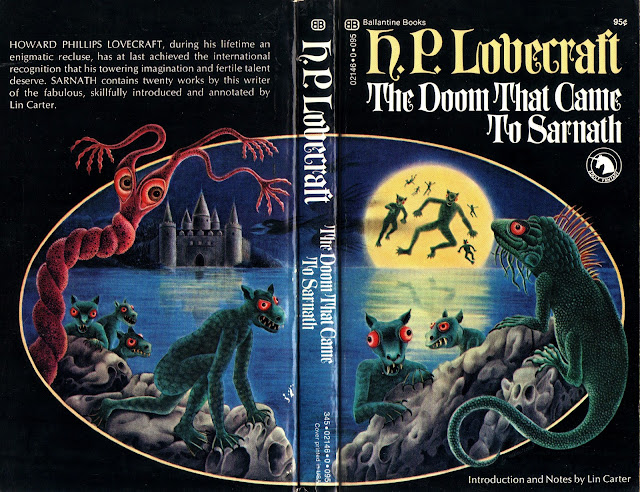 
There is in the land of Mnar a vast still lake that is fed by no stream, and out of which no stream flows. Ten thousand years ago there stood by its shore the mighty city of Sarnath, but Sarnath stands there no more.


In the ancient past, the people of Sarnath eradicated their neighbors, the fish-like moon people of Ib. However, the angry spirits of the Ib eventually get their revenge in a most ironic manner.


More than 10,000 years ago in the land of Mnar, the city of Sarnath sat by a lake. On the opposite shore stood the stone city of Ib, peopled by a "moon-race". They were green, voiceless and had fish-like faces, and worshiped a statue of Bokrug, the Great Water Lizard. Fearful, the people of Sarnath eradicated their neighbors and stole their idol of Bokrug. The statue soon mysteriously disappeared and Sarnath’s high-priest murdered (writing “DOOM” with his last of his strength).

A thousand years later, Sarnath is prosperous, and celebrates the anniversary of its destruction of Ib. That night, strange lights float over the suddenly-rising lake waters. When bystanders look into Sarnath's royal celebration halls, they see that the rulers have transformed into the moon creatures of Ib. The people flee the city, and looking back see the fish-like people of Ib peering from Sarnath’s towers. Later they return to Sarnath, and the missing idol of Ib is rediscovered, along with a suddenly-large population of water lizards. Mnar returns to the worship of Bokrug.


Then, close to the hour of midnight, all the bronze gates of Sarnath burst open and emptied forth a frenzied throng that blackened the plain, so that all the visiting princes and travelers fled away in fright. For on the faces of this throng was writ a madness born of horror unendurable, and on their tongues were words so terrible that no hearer paused for proof. Men whose eyes were wild with fear shrieked aloud of the sight within the king's banquet-hall, where through the windows were seen no longer the forms of Nargis-Hei and his nobles and slaves, but a horde of indescribable green voiceless things with bulging eyes, pouting, flabby lips, and curious ears; things which danced horribly, bearing in their paws golden platters set with rubies and diamonds and containing uncouth flames.


But half buried in the rushes was spied a curious green idol; an exceedingly ancient idol chiseled in the likeness of Bokrug, the great water-lizard. That idol, enshrined in the high temple at Ilarnek, was subsequently worshiped beneath the gibbous moon throughout the land of Mnar.

Follow'd by "The Statement of Randolph Carter". 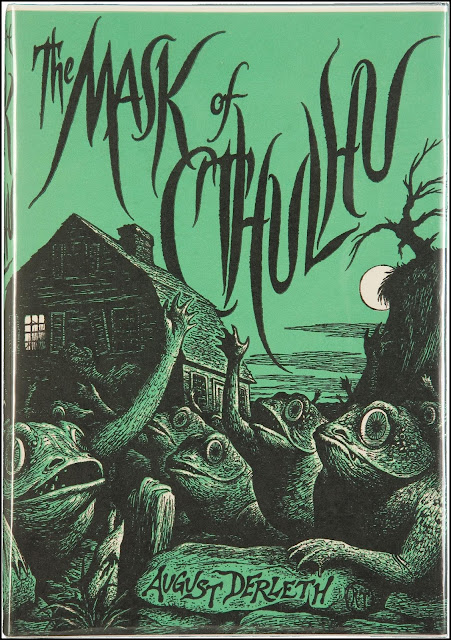