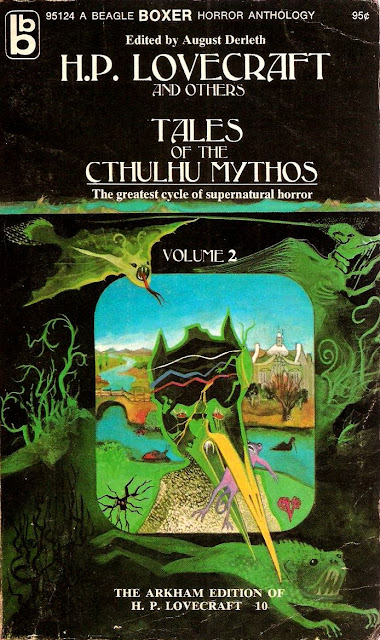 Written 1920.11, published in The United Amateur 1920.11 (only published professionally posthumously).


Nyarlathotep... the crawling chaos... I am the last... I will tell the audient void...


When a strange showman appears from the mysterious land of sand, a negative reaction from the crowd prompts him to show his true power.


Tales are heard of an ancient Egyptian mystic who travels from town to town, inducing nightmares wherever he goes with his “prophetic screens”. When the narrator tries to disprove Nyarlathotep’s powers at a demonstration/showing, his crowd is dispersed. When the lights of the city fail, the crowd finds themselves mysteriously drawn into three columns. Each column marches towards a dark fate. Inside a black vortex, the narrator’s own column comes across a dark cosmic vista, and they realize that doom has come to their world, accompanied by the sounds of drums and flutes.


Then we split up into narrow columns, each of which seemed drawn in a different direction. One disappeared in a narrow alley to the left, leaving only the echo of a shocking moan. Another filed down a weed-choked subway entrance, howling with a laughter that was mad. My own column was sucked toward the open country, and presently I felt a chill which was not of the hot autumn; for as we stalked out on the dark moor, we beheld around us the hellish moon-glitter of evil snows. Trackless, inexplicable snows, swept asunder in one direction only, where lay a gulf all the blacker for its glittering walls. The column seemed very thin indeed as it plodded dreamily into the gulf.


Screamingly sentient, dumbly delirious, only the gods that were can tell. A sickened, sensitive shadow writhing in hands that are not hands, and whirled blindly past ghastly midnights of rotting creation, corpses of dead worlds with sores that were cities, charnel winds that brush the pallid stars and make them flicker low. Beyond the worlds vague ghosts of monstrous things; half-seen columns of unsanctified temples that rest on nameless rocks beneath space and reach up to dizzy vacua above the spheres of light and darkness. And through this revolting graveyard of the universe the muffled, maddening beating of drums, and thin, monotonous whine of blasphemous flutes from inconceivable, unlighted chambers beyond Time; the detestable pounding and piping whereunto dance slowly, awkwardly, and absurdly the gigantic, tenebrous ultimate gods the blind, voiceless, mindless gargoyles whose soul is Nyarlathotep.

Follow'd by "The Picture in the House".