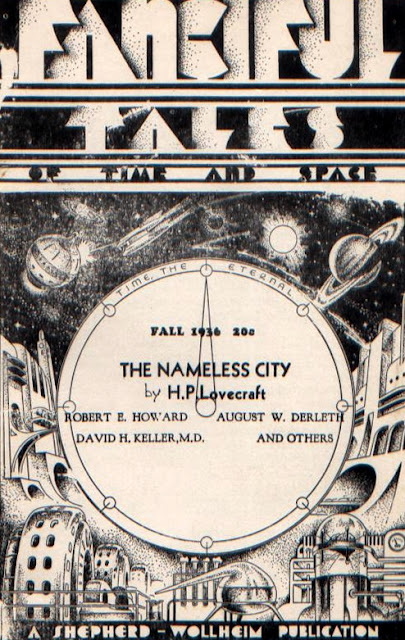 
When I drew nigh the nameless city I knew it was accursed. I was traveling in a parched and terrible valley under the moon, and afar I saw it protruding uncannily above the sands as parts of a corpse may protrude from an ill-made grave.


While descending into an underground labyrinth in the Arabian desert, the narrator discovers what appears to be the pictographic history of an ancient - and somewhat sinister - lost civilization.


An explorer finds a buried city in the Arabian desert. He goes down a long tunnel, seemingly-suited for “short” beings. After various low-ceiling tunnels, he passes through an area filled with display cases holding reptilian mummy-creatures. He also finds historical/narrative murals describing a race of lizard-like people who escape from the drying-out surface world into an underground paradise. The last story describes the tearing apart of a primitive human. The explorer comes across a door which leads to an illuminated void, with stairs leading down into mist. A great rushing wind enters from the direction of the surface and almost blows the explorer down into the illuminated void. As the wind gusts finish descending into the lighted abyss, he sees images of hateful reptile men, after which the door closes. The narrator departs to tell his tale.


...(The painted scenes) seemed to record a slow decadence of the ancient stock, coupled with a growing ferocity toward the outside world from which it was driven by the desert. The forms of the people - always represented by the sacred reptiles - appeared to be gradually wasting away, though their spirit as shewn hovering above the ruins by moonlight gained in proportion. Emaciated priests, displayed as reptiles in ornate robes, cursed the upper air and all who breathed it; and one terrible final scene shewed a primitive-looking man, perhaps a pioneer of ancient Irem, the City of Pillars, torn to pieces by members of the elder race....

Finally reason must have wholly snapped; for I fell to babbling over and over that unexplainable couplet of the mad Arab Alhazred, who dreamed of the nameless city:


That is not dead which can eternal lie,
And with strange aeons even death may die. 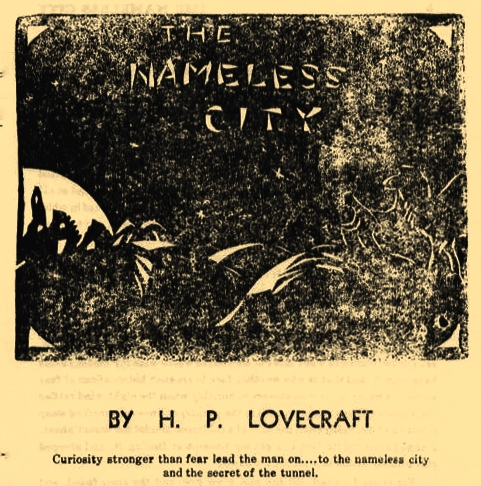 
And as the wind died away I was plunged into the ghoul-pooled darkness of earth's bowels; for behind the last of the creatures the great brazen door clanged shut with a deafening peal of metallic music whose reverberations swelled out to the distant world to hail the rising sun as Memnon hails it from the banks of the Nile.