Somewhere, to what remote and fearsome region I know not, Denys Barry has gone. I was with him the last night he lived among men, and heard his screams when the thing came to him; but all the peasants and police in County Meath could never find him, or the others, though they searched long and far. And now I shudder when I hear the frogs piping in swamps, or see the moon in lonely places.


When a developer begins to drain a notorious swamp in Ireland, dreams, madness and nefarious moonbeams ensue.


The narrator visits his friend Denys Barry in Kilderry, Ireland. Barry is planning to drain a swamp on his property, despite the locals' dismay. During the night the narrator has dreams of a pestilence falling across a city, and then the hills covering up the dead over the ages. The narrator wakes to sounds of flutes and sees the laborers dancing in a trance with ghostly figures. The next night a red light glares from the ruins next to the bog. The flutes and ghosts return and draw the laborers and servants into the bog, drowning them. Barry’s scream is heard. Outside the narrator encounters a horde of piping frogs, and then sees Barry’s struggling figure being drawn up into the sky on a moonbeam from the ruins.


The flutes piped horribly, and again I heard the beating of the drums from the direction of the island ruin. Then silently and gracefully the naiads reached the water and melted one by one into the ancient bog; while the line of followers, never checking their speed, splashed awkwardly after them and vanished amidst a tiny vortex of unwholesome bubbles which I could barely see in the scarlet light. And as the last pathetic straggler, the fat cook, sank heavily out of sight in that sullen pool, the flutes and the drums grew silent, and the blinding red rays from the ruins snapped instantaneously out, leaving the village of doom lone and desolate in the wan beams of a new-risen moon...

...As I fled from that accursed castle along the bog’s edge I heard a new sound; common, yet unlike any I had heard before at Kilderry. The stagnant waters, lately quite devoid of animal life, now teemed with a horde of slimy enormous frogs which piped shrilly and incessantly in tones strangely out of keeping with their size. They glistened bloated and green in the moonbeams, and seemed to gaze up at the fount of light. I followed the gaze of one very fat and ugly frog, and saw the second of the things which drove my senses away.... 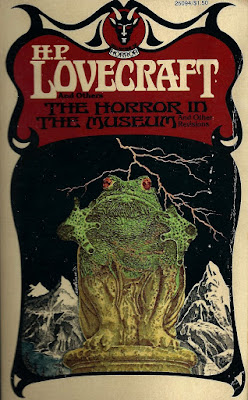 
...Stretching directly from the strange olden ruin on the far islet to the waning moon, my eyes seemed to trace a beam of faint quivering radiance having no reflection in the waters of the bog. And upward along that pallid path my fevered fancy pictured a thin shadow slowly writhing; a vague contorted shadow struggling as if drawn by unseen daemons. Crazed as I was, I saw in that awful shadow a monstrous resemblance—a nauseous, unbelievable caricature—a blasphemous effigy of him who had been Denys Barry.