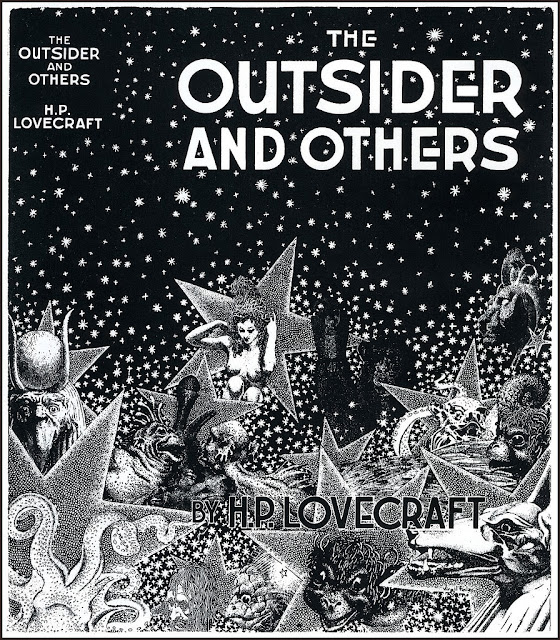 
Unhappy is he to whom the memories of childhood bring only fear and sadness. Wretched is he who looks back upon lone hours in vast and dismal chambers with brown hangings and maddening rows of antique books, or upon awed watches in twilight groves of grotesque, gigantic, and vine-encumbered trees that silently wave twisted branches far aloft. Such a lot the gods gave to me—to me, the dazed, the disappointed; the barren, the broken. And yet I am strangely content, and cling desperately to those sere memories, when my mind momentarily threatens to reach beyond to the other.


Leaving his lonely castle, a socially-clumsy character crashes a party. Horror follows when a particular lounge fixture is encountered.


The narrator talks about his solitary childhood in a creepy castle. He climbs a dark tower and ascends through a trap door into a room filled with boxes (crypts). He eventually ascends through a metal grating to discover that he is now on the grounds of an ancient stone church, lit by moonlight. He eventually comes across a dance party in a decrepit castle, but when he enters the crowd goes mad with terror. He sees an inhuman monster, and touching it, feels glass (a mirror). In horror he runs away and haunts the world by moonlight, always an outsider.


As I approached the arch I began to perceive the presence more clearly; and then, with the first and last sound I ever uttered—a ghastly ululation that revolted me almost as poignantly as its noxious cause—I beheld in full, frightful vividness the inconceivable, indescribable, and unmentionable monstrosity which had by its simple appearance changed a merry company to a herd of delirious fugitives.

I cannot even hint what it was like, for it was a compound of all that is unclean, uncanny, unwelcome, abnormal, and detestable. It was the ghoulish shade of decay, antiquity, and desolation; the putrid, dripping eidolon of unwholesome revelation; the awful baring of that which the merciful earth should always hide. God knows it was not of this world—or no longer of this world—yet to my horror I saw in its eaten-away and bone-revealing outlines a leering, abhorrent travesty on the human shape; and in its mouldy, disintegrating apparel an unspeakable quality that chilled me even more.

...I became suddenly and agonisingly aware of the nearness of the carrion thing, whose hideous hollow breathing I half fancied I could hear. Nearly mad, I found myself yet able to throw out a hand to ward off the foetid apparition which pressed so close; when in one cataclysmic second of cosmic nightmarishness and hellish accident my fingers touched the rotting outstretched paw of the monster beneath the golden arch.

Follow'd by "The Other Gods".