1926 The Dream Quest of Unknown Kadath


Three times Randolph Carter dreamed of the marvelous city, and three times was he snatched away while still he paused on the high terrace above it.


Dream-explorer Randolph Carter takes an epic journey through the Dream lands in search of an audience with the Great Ones at Kadath. However, behind the scenes, Nyarlathotep rallies dark forces in opposition to Carter's quest. 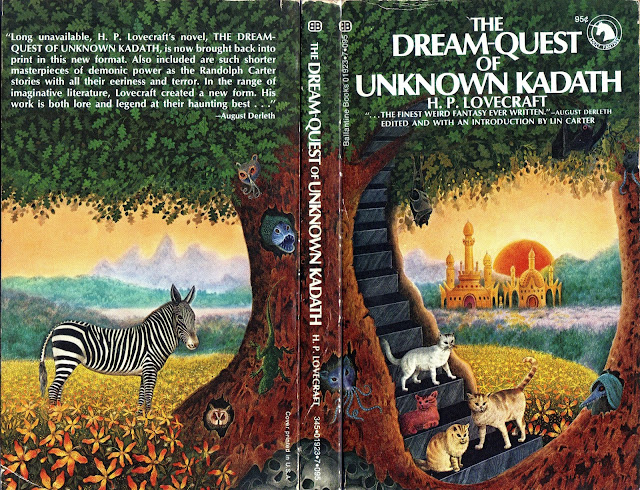 
The slant-eyed man had set the curious lamp upon one of the high and wickedly stained altar-stones by the pit, and had moved forward somewhat to talk to the High-Priest with his hands. Carter, hitherto wholly passive, now gave that man a terrific push with all the wild strength of fear, so that the victim toppled at once into that gaping well which rumor holds to reach down to the hellish Vaults of Zin where Gugs hunt ghasts in the dark. In almost the same second he seized the lamp from the altar and darted out into the frescoed labyrinths, racing this way and that as chance determined and trying not to think of the stealthy padding of shapeless paws on the stones behind him, or of the silent wrigglings and crawlings which must be going on back there in lightless corridors.

"Hei! Aa-shanta 'nygh! You are off! Send back earth's gods to their haunts on unknown Kadath, and pray to all space that you may never meet me in my thousand other forms. Farewell, Randolph Carter, and beware;  for I am Nyarlathotep, the Crawling Chaos."


And vast infinities away, past the Gate of Deeper Slumber and the enchanted wood and the garden lands and the Cerenarian Sea and the twilight reaches of Inquanok, the crawling chaos Nyarlathotep strode brooding into the onyx castle atop unknown Kadath in the cold waste, and taunted insolently the mild gods of earth whom he had snatched abruptly from their scented revels in the marvelous sunset city.

Follow'd by "The Silver Key".