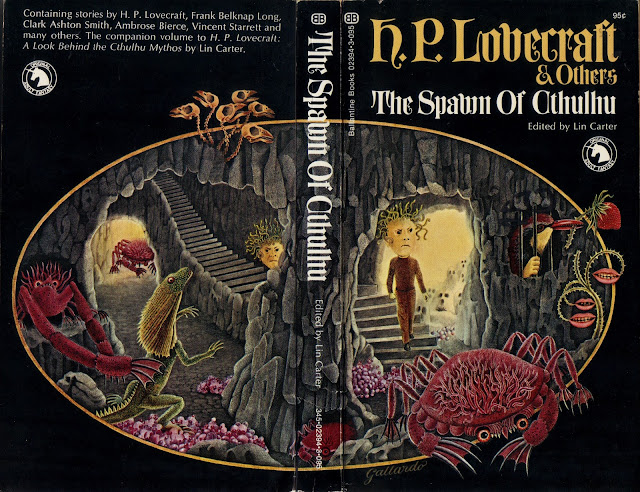 
When Randolph Carter was thirty he lost the key of the gate of dreams. Prior to that time he had made up for the prosiness of life by nightly excursions to strange and ancient cities beyond space, and lovely, unbelievable garden lands across ethereal seas; but as middle age hardened upon him he felt these liberties slipping away little by little, until at last he was cut off altogether. No more could his galleys sail up the river Oukranos past the gilded spires of Thran, or his elephant caravans tramp through perfumed jungles in Kled, where forgotten palaces with veined ivory columns sleep lovely and unbroken under the moon.


Having lost the power to travel in the Dream lands, Randolph Carter searches his past for clues to a silver key which may unlock the door once again.


At age 30, Randolph Carter was no longer able to take dream journeys (such as in “The Dream-Quest of Unknown Kadath”). The harshness of modern life had taken away his ability to enter the Dream lands. He began to look for new adventures in the occult, but found them disappointing. At one point he befriended a man of the South, until the man disappeared (“The Statement of Randolph Carter”). Later he does some exploring in Arkham (“The Unnamable”). At age 50 some hints of the Dream lands begin to resurface. In one dream, his dead grandfather leads him to a hidden silver key, accompanied by cryptic writing similar to the papers of the southerner, Harley Warren. Tempted by dream images, Carter returns to the Miskatonic River area, passing by some legendary elms (“The Tree”?). Returning to his childhood home, he somehow travels back into the past as a child and runs into a former hired hand. He spends the night with his aunt and uncle. The next day he goes exploring and finds a cave and goes deeper into it than anyone else had gone before. Back in the present, Carter has disappeared. The narrator expects to see Carter again in the Dream lands.


Then one night his grandfather reminded him of a key. The grey old scholar, as vivid as in life, spoke long and earnestly of their ancient line, and of the strange visions of the delicate and sensitive men who composed it. He spoke of the flame-eyed Crusader who learnt wild secrets of the Saracens that held him captive; and of the first Sir Randolph Carter who studied magic when Elizabeth was queen. He spoke, too, of that Edmund Carter who had just escaped hanging in the Salem witchcraft, and who had placed in an antique box a great silver key handed down from his ancestors. Before Carter awaked, the gentle visitant had told him where to find that box; that carved oak box of archaic wonder whose grotesque lid no hand had raised for two centuries.

The (Not So) Horrible Conclusion:


I shall ask him when I see him, for I expect to meet him shortly in a certain dream-city we both used to haunt. It is rumoured in Ulthar, beyond the river Skai, that a new king reigns on the opal throne in Ilek-Vad, that fabulous town of turrets atop the hollow cliffs of glass overlooking the twilight sea wherein the bearded and finny Gnorri build their singular labyrinths, and I believe I know how to interpret this rumour. Certainly, I look forward impatiently to the sight of that great silver key, for in its cryptical arabesques there may stand symbolised all the aims and mysteries of a blindly impersonal cosmos.

Follow'd by "The Case of Charles Dexter Ward".