1927 The Case of Charles Dexter Ward 'The essential Saltes of Animals may be so prepared and preserved, that an ingenious Man may have the whole Ark of Noah in his own Studie, and raise the fine Shape of an Animal out of its Ashes at his Pleasure; and by the lyke Method from the essential Saltes of humane Dust, a Philosopher may, without any criminal Necromancy, call up the Shape of any dead Ancestour from the Dust whereinto his Bodie has been incinerated.'


Charles Dexter Ward becomes obsessed with the alchemical lore surrounding one of his notorious ancestors, a certain Salem warlock named Joseph Curwen. Eventually his investigations lead him to identify with his diabolical ancestor more closely than he'd like.

Hadd a Squad of 20 Militia up to talk about what the Country Folk say. Must digg deeper and have less Hearde. These Roumanians plague me damnably, being officious and particular where you cou'd buy a Magyar off with a Drinke and Food.

Last monthe M. got me ye Sarcophagus of ye Five Sphinxes from ye Acropolis where He whome I call'd up say'd it wou'd be, and I have hadde 3 Talkes with What was therein inhum'd. It will go to S. O. in Prague directly, and thence to you. It is stubborn but you know ye Way with Such.

You shew Wisdom in having lesse about than Before; for there was no Neede to keep the Guards in Shape and eat'g off their Heads, and it made Much to be founde in Case of Trouble, as you too welle knowe. You can now move and worke elsewhere with no Kill'g Trouble if needful, tho' I hope no Thing will soon force you to so Bothersome a Course.

I rejoice that you traffick not so much with Those Outside; for there was ever a Mortall Peril in it, and you are sensible what it did when you ask'd Protection of One not dispos'd to give it.

You excel me in gett'g ye Formulae so another may saye them with Success, but Borellus fancy'd it wou'd be so if just ye right Wordes were hadd. Does ye Boy use 'em often? I regret that he growes squeamish, as I fear'd he wou'd when I hadde him here nigh 15 Monthes, but am sensible you knowe how to deal with him. You can't saye him down with ye Formula, for that will Worke only upon such as ye other Formula hath call'd up from Saltes; but you still have strong Handes and Knife and Pistol, and Graves are not harde to digg, nor Acids loth to burne.

O. sayes you have promis'd him B. F. I must have him after. B. goes to you soone, and may he give you what you wishe of that Darke Thing belowe Memphis. Imploy care in what you calle up, and beware of ye Boy.

It will be ripe in a yeare's time to have up ye Legions from Underneath, and then there are no Boundes to what shal be oures. Have Confidence in what I saye, for you knowe O. and I have hadd these 150 yeares more than you to consulte these Matters in.

"This is no common case - it is a madness out of time and a horror from beyond the spheres which no police or lawyers or courts or alienists could ever fathom or grapple with. Thank God some chance has left inside me the spark of imagination, that I might not go astray in thinking out this thing. You cannot deceive me, Joseph Curwen, for I know that your accursed magic is true!"


The madness out of time had subsided, and the case of Charles Dexter Ward was closed. Opening his eyes before staggering out of that room of horror, Dr. Willett saw that what he had kept in memory had not been kept amiss. There had, as he had predicted, been no need for acids. For like his accursed picture a year before, Joseph Curwen now lay scattered on the floor as a thin coating of fine bluish-grey dust.

Follow'd by "The Colour Out of Space". 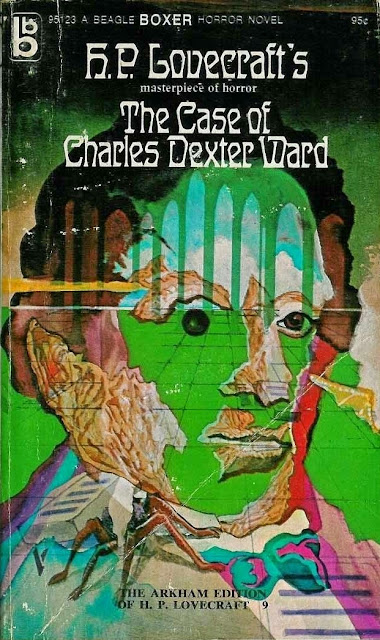