When a traveler in north central Massachusetts takes the wrong fork at the junction of Aylesbury pike just beyond Dean's Corners he comes upon a lonely and curious country....Without knowing why, one hesitates to ask directions from the gnarled solitary figures spied now and then on crumbling doorsteps or on the sloping, rock-strewn meadows. Those figures are so silent and furtive that one feels somehow confronted by forbidden things, with which it would be better to have nothing to do.


The apparently-fatherless birth of Wilbur Whateley leads to a giant invisible creature roaming the countryside and wreaking havoc. Scientists from Miskatonic University arrive to investigate.


'I dun't keer what folks think - ef Lavinny's boy looked like his pa, he wouldn't look like nothin' ye expeck. Ye needn't think the only folks is the folks hereabouts. Lavinny's read some, an' has seed some things the most o' ye only tell abaout. I calc'late her man is as good a husban' as ye kin find this side of Aylesbury; an' ef ye knowed as much abaout the hills as I dew, ye wouldn't ast no better church weddin' nor her'n. Let me tell ye suthin - some day yew folks'll hear a child o' Lavinny's a-callin' its father's name on the top o' Sentinel Hill!'

'More space, Willy, more space soon. Yew grows - an' that grows faster. It'll be ready to serve ye soon, boy. Open up the gates to Yog-Sothoth with the long chant that ye'll find on page 751 of the complete edition, an' then put a match to the prison. Fire from airth can't burn it nohaow... Feed it reg'lar, Willy, an' mind the quantity; but dun't let it grow too fast fer the place, fer ef it busts quarters or gits aout afore ye opens to Yog-Sothoth, it's all over an' no use. Only them from beyont kin make it multiply an' work... Only them, the old uns as wants to come back...'

Nor is it to be thought (ran the text as Armitage mentally translated it) that man is either the oldest or the last of earth's masters, or that the common bulk of life and substance walks alone. The Old Ones were, the Old Ones are, and the Old Ones shall be. Not in the spaces we know, but between them, they walk serene and primal, undimensioned and to us unseen. Yog-Sothoth knows the gate. Yog-Sothoth is the gate. Yog-Sothoth is the key and guardian of the gate. Past, present, future, all are one in Yog-Sothoth. He knows where the Old Ones broke through of old, and where They shall break through again. He knows where They had trod earth's fields, and where They still tread them, and why no one can behold Them as They tread. By Their smell can men sometimes know Them near, but of Their semblance can no man know, saving only in the features of those They have begotten on mankind; and of those are there many sorts, differing in likeness from man's truest eidolon to that shape without sight or substance which is Them. They walk unseen and foul in lonely places where the Words have been spoken and the Rites howled through at their Seasons. The wind gibbers with Their voices, and the earth mutters with Their consciousness. They bend the forest and crush the city, yet may not forest or city behold the hand that smites. Kadath in the cold waste hath known Them, and what man knows Kadath? The ice desert of the South and the sunken isles of Ocean hold stones whereon Their seal is engraver, but who bath seen the deep frozen city or the sealed tower long garlanded with seaweed and barnacles? Great Cthulhu is Their cousin, yet can he spy Them only dimly. Iä! Shub-Niggurath! As a foulness shall ye know Them. Their hand is at your throats, yet ye see Them not; and Their habitation is even one with your guarded threshold. Yog-Sothoth is the key to the gate, whereby the spheres meet. Man rules now where They ruled once; They shall soon rule where man rules now. After summer is winter, after winter summer. They wait patient and potent, for here shall They reign again.

...It was partly human, beyond a doubt, with very manlike hands and head, and the goatish, chinless face had the stamp of the Whateley's upon it. But the torso and lower parts of the body were teratologically fabulous, so that only generous clothing could ever have enabled it to walk on earth unchallenged or uneradicated.

Above the waist it was semi-anthropomorphic; though its chest, where the dog's rending paws still rested watchfully, had the leathery, reticulated hide of a crocodile or alligator. The back was piebald with yellow and black, and dimly suggested the squamous covering of certain snakes. Below the waist, though, it was the worst; for here all human resemblance left off and sheer phantasy began. The skin was thickly covered with coarse black fur, and from the abdomen a score of long greenish-grey tentacles with red sucking mouths protruded limply.

Their arrangement was odd, and seemed to follow the symmetries of some cosmic geometry unknown to earth or the solar system. On each of the hips, deep set in a kind of pinkish, ciliated orbit, was what seemed to be a rudimentary eye; whilst in lieu of a tail there depended a kind of trunk or feeler with purple annular markings, and with many evidences of being an undeveloped mouth or throat. The limbs, save for their black fur, roughly resembled the hind legs of prehistoric earth's giant saurians, and terminated in ridgy-veined pads that were neither hooves nor claws. When the thing breathed, its tail and tentacles rhythmically changed color, as if from some circulatory cause normal to the non-human greenish tinge, whilst in the tail it was manifest as a yellowish appearance which alternated with a sickly grayish-white in the spaces between the purple rings...

'Oh, oh, my Gawd, that haff face - that haff face on top of it... that face with the red eyes an' crinkly albino hair, an' no chin, like the Whateleys... It was a octopus, centipede, spider kind o' thing, but they was a haff-shaped man's face on top of it, an' it looked like Wizard Whateley's, only it was yards an' yards acrost....'


'But as to this thing we've just sent back - the Whateleys raised it for a terrible part in the doings that were to come. It grew fast and big from the same reason that Wilbur grew fast and big - but it beat him because it had a greater share of the outsideness in it. You needn't ask how Wilbur called it out of the air. He didn't call it out. It was his twin brother, but it looked more like the father than he did.'

Follow'd by "The Whisperer in Darkness". 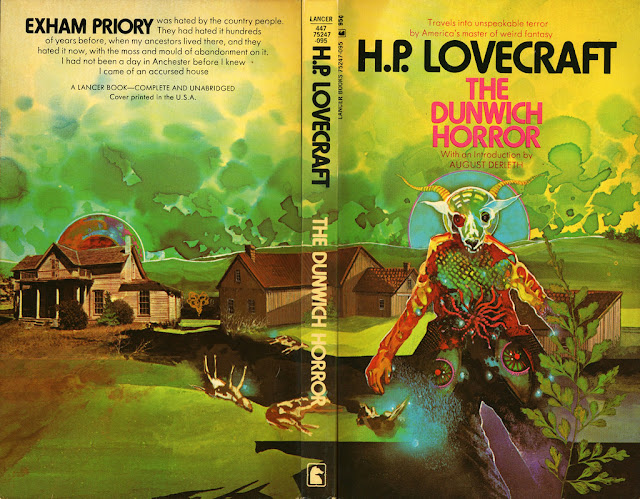