1930 The Whisperer in Darkness


Bear in mind closely that I did not see any actual visual horror at the end. To say that a mental shock was the cause of what I inferred - that last straw which sent me racing out of the lonely Akeley farmhouse and through the wild domed hills of Vermont in a commandeered motor at night - is to ignore the plainest facts of my final experience. Notwithstanding the deep things I saw and heard, and the admitted vividness the impression produced on me by these things, I cannot prove even now whether I was right or wrong in my hideous inference... there was not even a sign that a guest had been there, or that those horrible cylinders and machines had been stored in the study. 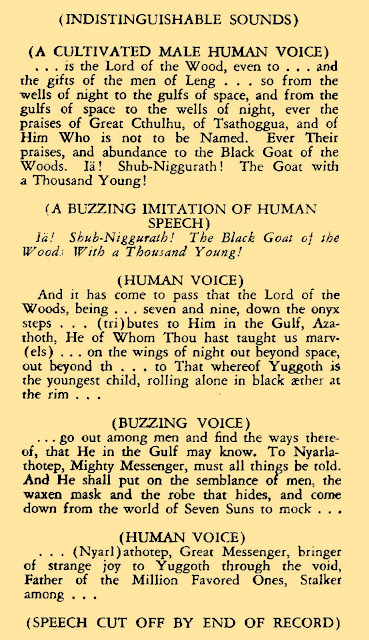 "...The Outer Beings are perhaps the most marvelous organic things in or beyond all space and time-members of a cosmos-wide race of which all other life-forms are merely degenerate variants. They are more vegetable than animal, if these terms can be applied to the sort of matter composing them, and have a somewhat fungoid structure; though the presence of a chlorophyll-like substance and a very singular nutritive system differentiate them altogether from true cormophytic fungi. Indeed, the type is composed of a form of matter totally alien to our part of space - with electrons having a wholly different vibration-rate...

"The genus is unique in its ability to traverse the heatless and airless interstellar void in full corporeal form, and some of its variants cannot do this without mechanical aid or curious surgical transpositions. Only a few species have the ether-resisting wings characteristic of the Vermont variety. Those inhabiting certain remote peaks in the Old World were brought in other ways. Their external resemblance to animal life, and to the sort of structure we understand as material, is a matter of parallel evolution rather than of close kinship. Their brain-capacity exceeds that of any other surviving life-form, although the winged types of our hill country are by no means the most highly developed. Telepathy is their usual means of discourse, though we have rudimentary vocal organs which, after a slight operation (for surgery is an incredibly expert and everyday thing among them), can roughly duplicate the speech of such types of organism as still use speech.

"Their main immediate abode is a still undiscovered and almost lightless planet at the very edge of our solar system - beyond Neptune, and the ninth in distance from the sun. It is, as we have inferred, the object mystically hinted at as "Yuggoth" in certain ancient and forbidden writings; and it will soon be the scene of a strange focusing of thought upon our world in an effort to facilitate mental rapport. I would not be surprised if astronomers become sufficiently sensitive to these thought-currents to discover Yuggoth when the Outer Ones wish them to do so. But Yuggoth, of course, is only the stepping-stone. The main body of the beings inhabits strangely organized abysses wholly beyond the utmost reach of any human imagination. The space-time globule which we recognize as the totality of all cosmic entity is only an atom in the genuine infinity which is theirs.

"There are mighty cities on Yuggoth - great tiers of terraced towers built of black stone like the specimen I tried to send you. That came from Yuggoth. The sun shines there no brighter than a star, but the beings need no light. They have other subtler senses, and put no windows in their great houses and temples. Light even hurts and hampers and confuses them, for it does not exist at all in the black cosmos outside time and space where they came from originally. To visit Yuggoth would drive any weak man mad - yet I am going there. The black rivers of pitch that flow under those mysterious cyclopean bridges - things built by some elder race extinct and forgotten before the beings came to Yuggoth from the ultimate voids - ought to be enough to make any man a Dante or Poe if he can keep sane long enough to tell what he has seen.

"But remember - that dark world of fungoid gardens and windowless cities isn’t really terrible. It is only to us that it would seem so. Probably this world seemed just as terrible to the beings when they first explored it in the primal age. You know they were here long before the fabulous epoch of Cthulhu was over, and remember all about sunken R’lyeh when it was above the waters. They’ve been inside the earth, too - there are openings which human beings know nothing of - some of them in these very Vermont hills - and great worlds of unknown life down there; blue-litten K’n-yan, red-litten Yoth, and black, lightless N’kai. It’s from N’kai that frightful Tsathoggua came - you know, the amorphous, toad-like god-creature mentioned in the Pnakotic Manuscripts and the Necronomicon and the Commoriom myth-cycle preserved by the Atlantean high-priest Klarkash-Ton.


I hope - devoutly hope-that they were the waxen products of a master artist, despite what my inmost fears tell me. Great God! That whisperer in darkness with its morbid odour and vibrations! Sorcerer, emissary, changeling, outsider...that hideous repressed buzzing...and all the time in that fresh, shiny cylinder on the shelf...poor devil... "Prodigious surgical, biological, chemical, and mechanical skill...”

For the things in the chair, perfect to the last, subtle detail of microscopic resemblance - or identity - were the face and hands of Henry Wentworth Akeley.

Follow'd by "At the Mountains of Madness".