1931 The Shadow Over Innsmouth


During the winter of 1927–28 officials of the Federal government made a strange and secret investigation of certain conditions in the ancient Massachusetts seaport of Innsmouth. The public first learned of it in February, when a vast series of raids and arrests occurred, followed by the deliberate burning and dynamiting—under suitable precautions—of an enormous number of crumbling, worm-eaten, and supposedly empty houses along the abandoned waterfront. Uninquiring souls let this occurrence pass as one of the major clashes in a spasmodic war on liquor.


When a curious tourist decides to make a visit to the creepy coastal town of Innsmouth, he finds himself hunted by the goggle-eyed, shambling locals. Later, he learns an awful truth about the "Deep Ones". 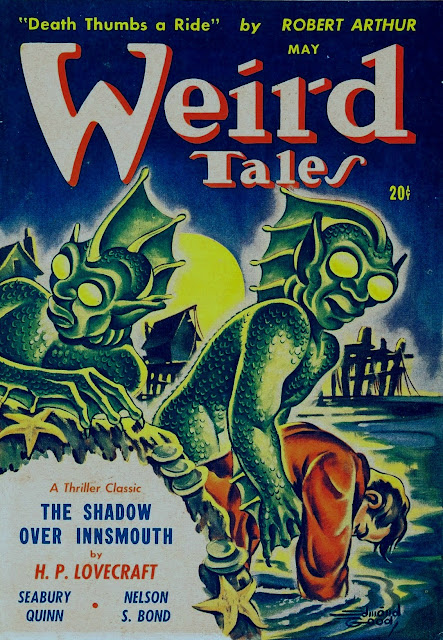 
There certainly is a strange kind of streak in the Innsmouth folks today—I don’t know how to explain it, but it sort of makes you crawl. You’ll notice a little in Sargent if you take his bus. Some of ’em have queer narrow heads with flat noses and bulgy, stary eyes that never seem to shut, and their skin ain’t quite right. Rough and scabby, and the sides of their necks are all shrivelled or creased up. Get bald, too, very young. The older fellows look the worst—fact is, I don’t believe I’ve ever seen a very old chap of that kind. Guess they must die of looking in the glass!

“Yew want to know what the reel horror is, hey? Wal, it’s this—it ain’t what them fish devils hez done, but what they’re a-goin’ to do! They’re a-bringin’ things up aout o’ whar they come from into the taown—ben doin’ it fer years, an’ slackenin’ up lately. Them haouses north o’ the river betwixt Water an’ Main Streets is full of ’em—them devils an’ what they brung—an’ when they git ready… I say, when they git ready… ever hear tell of a shoggoth?…

“Hey, d’ye hear me? I tell ye I know what them things be—I seen ’em one night when… EH—AHHHH—AH! E’YAAHHHH…”

It was the end, for whatever remains to me of life on the surface of this earth, of every vestige of mental peace and confidence in the integrity of Nature and of the human mind. Nothing that I could have imagined—nothing, even, that I could have gathered had I credited old Zadok’s crazy tale in the most literal way—would be in any way comparable to the daemoniac, blasphemous reality that I saw—or believe I saw. I have tried to hint what it was in order to postpone the horror of writing it down baldly. Can it be possible that this planet has actually spawned such things; that human eyes have truly seen, as objective flesh, what man has hitherto known only in febrile phantasy and tenuous legend?

And yet I saw them in a limitless stream—flopping, hopping, croaking, bleating—surging inhumanly through the spectral moonlight in a grotesque, malignant saraband of fantastic nightmare. And some of them had tall tiaras of that nameless whitish-gold metal… and some were strangely robed… and one, who led the way, was clad in a ghoulishly humped black coat and striped trousers, and had a man’s felt hat perched on the shapeless thing that answered for a head…

I think their predominant colour was a greyish-green, though they had white bellies. They were mostly shiny and slippery, but the ridges of their backs were scaly. Their forms vaguely suggested the anthropoid, while their heads were the heads of fish, with prodigious bulging eyes that never closed. At the sides of their necks were palpitating gills, and their long paws were webbed. They hopped irregularly, sometimes on two legs and sometimes on four. I was somehow glad that they had no more than four limbs. Their croaking, baying voices, clearly used for articulate speech, held all the dark shades of expression which their staring faces lacked.

I met also that which had been her grandmother. For eighty thousand years Pth’thya-l’yi had lived in Y’ha-nthlei, and thither she had gone back after Obed Marsh was dead. Y’ha-nthlei was not destroyed when the upper-earth men shot death into the sea. It was hurt, but not destroyed. The Deep Ones could never be destroyed, even though the palaeogean magic of the forgotten Old Ones might sometimes check them. For the present they would rest; but some day, if they remembered, they would rise again for the tribute Great Cthulhu craved. It would be a city greater than Innsmouth next time. They had planned to spread, and had brought up that which would help them, but now they must wait once more. For bringing the upper-earth men’s death I must do a penance, but that would not be heavy. This was the dream in which I saw a shoggoth for the first time, and the sight set me awake in a frenzy of screaming. That morning the mirror definitely told me I had acquired the Innsmouth look.


I shall plan my cousin’s escape from that Canton madhouse, and together we shall go to marvel-shadowed Innsmouth. We shall swim out to that brooding reef in the sea and dive down through black abysses to Cyclopean and many-columned Y’ha-nthlei, and in that lair of the Deep Ones we shall dwell amidst wonder and glory for ever.

Follow'd by "The Dreams in the Witch House".