1931 At the Mountains of Madness


I am forced into speech because men of science have refused to follow my advice without knowing why. It is altogether against my will that I tell my reasons for opposing this contemplated invasion of the antarctic - with its vast fossil hunt and its wholesale boring and melting of the ancient ice caps. And I am the more reluctant because my warning may be in vain. 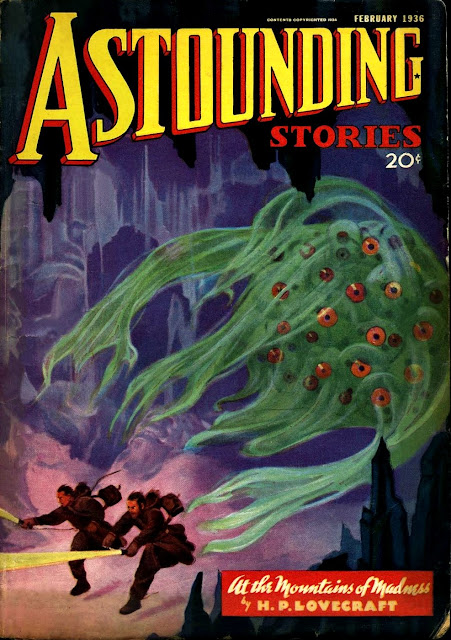 
In Antarctica, a team of Miskatonic scientists find signs of an aborted alien invasion from ancient pre-human times. Exploring deeper into a dead alien city, they soon realize that the complex might not be as abandoned as they first thought.

...Have found peculiar soapstone fragment about six inches across and an inch and a half thick, wholly unlike any visible local formation - greenish, but no evidences to place its period. Has curious smoothness and regularity. Shaped like five-pointed star with tips broken off, and signs of other cleavage at inward angles and in center of surface. Small, smooth depression in center of unbroken surface. Arouses much curiosity as to source and weathering. Probably some freak of water action.

...Like a barrel with five bulging ridges in place of staves. Lateral breakages, as of thinnish stalks, are at equator in middle of these ridges. In furrows between ridges are curious growths - combs or wings that fold up and spread out like fans. All greatly damaged but one, which gives almost seven-foot wing spread. Arrangement reminds one of certain monsters of primal myth, especially fabled Elder Things in Necronomicon.

...Their wings seem to be membranous, stretched on frame work of glandular tubing. Apparent minute orifices in frame tubing at wing tips. Ends of body shriveled, giving no clue to interior or to what has been broken off there. Must dissect when we get back to camp...

...Complete specimens have such uncanny resemblance to certain creatures of primal myth that suggestion of ancient existence outside antarctic becomes inevitable. Dyer and Pabodie have read Necronomicon and seen Clark Ashton Smith’s nightmare paintings based on text, and will understand when I speak of Elder Things supposed to have created all earth life as jest or mistake. Students have always thought conception formed from morbid imaginative treatment of very ancient tropical radiata. Also like prehistoric folklore things Wilmarth has spoken of - Cthulhu cult appendages, etc.

The effect was that of a Cyclopean city of no architecture known to man or to human imagination, with vast aggregations of night-black masonry embodying monstrous perversions of geometrical laws. There were truncated cones, sometimes terraced or fluted, surmounted by tall cylindrical shafts here and there bulbously enlarged and often capped with tiers of thinnish scalloped disks; and strange beetling, table-like constructions suggesting piles of multitudinous rectangular slabs or circular plates or five-pointed stars with each one overlapping the one beneath. There were composite cones and pyramids either alone or surmounting cylinders or cubes or flatter truncated cones and pyramids, and occasional needle-like spires in curious clusters of five. All of these febrile structures seemed knit together by tubular bridges crossing from one to the other at various dizzy heights, and the implied scale of the whole was terrifying and oppressive in its sheer gigantism. The general type of mirage was not unlike some of the wilder forms observed and drawn by the arctic whaler Scoresby in 1820, but at this time and place, with those dark, unknown mountain peaks soaring stupendously ahead, that anomalous elder-world discovery in our minds, and the pall of probable disaster enveloping the greater part of our expedition, we all seemed to find in it a taint of latent malignity and infinitely evil portent.

On and around that laboratory table were strewn other things, and it did not take long for us to guess that those things were the carefully though oddly and inexpertly dissected parts of one man and one dog...

...It was under the sea, at first for food and later for other purposes, that they first created earth life - using available substances according to long-known methods. The more elaborate experiments came after the annihilation of various cosmic enemies. They had done the same thing on other planets, having manufactured not only necessary foods, but certain multicellular protoplasmic masses capable of molding their tissues into all sorts of temporary organs under hypnotic influence and thereby forming ideal slaves to perform the heavy work of the community. These viscous masses were without doubt what Abdul Alhazred whispered about as the "Shoggoths" in his frightful Necronomicon, though even that mad Arab had not hinted that any existed on earth except in the dreams of those who had chewed a certain alkaloidal herb. When the star-headed Old Ones on this planet had synthesized their simple food forms and bred a good supply of Shoggoths, they allowed other cell groups to develop into other forms of animal and vegetable life for sundry purposes, extirpating any whose presence became troublesome.

With the aid of the Shoggoths, whose expansions could be made to lift prodigious weights, the small, low cities under the sea grew to vast and imposing labyrinths of stone not unlike those which later rose on land. Indeed, the highly adaptable Old Ones had lived much on land in other parts of the universe, and probably retained many traditions of land construction.

...for Shoggoths and their work ought not to be seen by human beings or portrayed by any beings. The mad author of the Necronomicon had nervously tried to swear that none had been bred on this planet, and that only drugged dreamers had even conceived them. Formless protoplasm able to mock and reflect all forms and organs and processes - viscous agglutinations of bubbling cells - rubbery fifteen-foot spheroids infinitely plastic and ductile - slaves of suggestion, builders of cities - more and more sullen, more and more intelligent, more and more amphibious, more and more imitative! Great God! What madness made even those blasphemous Old Ones willing to use and carve such things?

And now, when Danforth and I saw the freshly glistening and reflectively iridescent black slime which clung thickly to those headless bodies and stank obscenely with that new, unknown odor whose cause only a diseased fancy could envisage - clung to those bodies and sparkled less voluminously on a smooth part of the accursedly resculptured wall in a series of grouped dots - we understood the quality of cosmic fear to its uttermost depths. It was not fear of those four missing others - for all too well did we suspect they would do no harm again. Poor devils! After all, they were not evil things of their kind. They were the men of another age and another order of being. Nature had played a hellish jest on them - as it will on any others that human madness, callousness, or cruelty may hereafter dig up in that hideously dead or sleeping polar waste - and this was their tragic homecoming. They had not been even savages - for what indeed had they done? That awful awakening in the cold of an unknown epoch - perhaps an attack by the furry, frantically barking quadrupeds, and a dazed defense against them and the equally frantic white simians with the queer wrappings and paraphernalia ... poor Lake, poor Gedney... and poor Old Ones! Scientists to the last - what had they done that we would not have done in their place? God, what intelligence and persistence! What a facing of the incredible, just as those carven kinsmen and forbears had faced things only a little less incredible! Radiates, vegetables, monstrosities, star spawn - whatever they had been, they were men!

"South Station Under - Washington Under - Park Street Under-Kendall - Central - Harvard - " The poor fellow was chanting the familiar stations of the Boston-Cambridge tunnel that burrowed through our peaceful native soil thousands of miles away in New England, yet to me the ritual had neither irrelevance nor home feeling. It had only horror, because I knew unerringly the monstrous, nefandous analogy that had suggested it. We had expected, upon looking back, to see a terrible and incredible moving entity if the mists were thin enough; but of that entity we had formed a clear idea. What we did see - for the mists were indeed all too maliguly thinned - was something altogether different, and immeasurably more hideous and detestable. It was the utter, objective embodiment of the fantastic novelist’s "thing that should not be"; and its nearest comprehensible analogue is a vast, onrushing subway train as one sees it from a station platform - the great black front looming colossally out of infinite subterranean distance, constellated with strangely colored lights and filling the prodigious burrow as a piston fills a cylinder.

Still came that eldritch, mocking cry- "Tekeli-li! Tekeli-li!" and at last we remembered that the demoniac Shoggoths - given life, thought, and plastic organ patterns solely by the Old Ones, and having no language save that which the dot groups expressed - had likewise no voice save the imitated accents of their bygone masters. 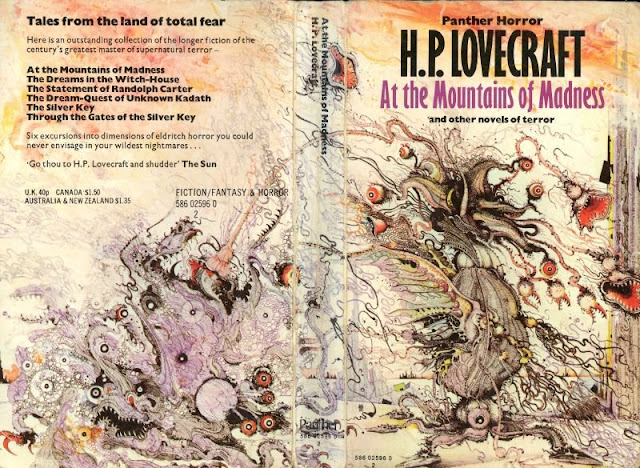 
At the time, his shrieks were confined to the repetition of a single, mad word of all too obvious source: "Tekeli-li! Tekeli-li!"

Follow'd by "The Shadow Over Innsmouth".