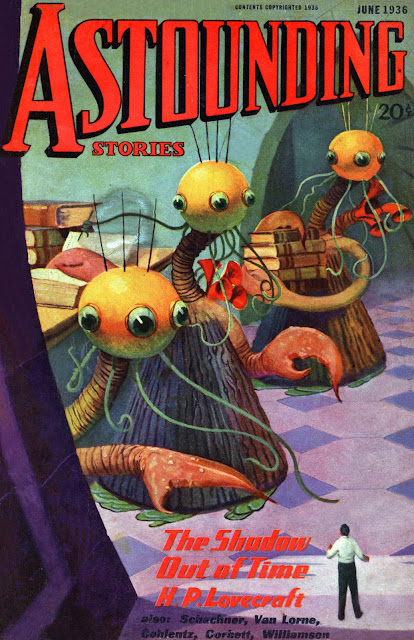 
After twenty-two years of nightmare and terror, saved only by a desperate conviction of the mythical source of certain impressions, I am unwilling to vouch for the truth of that which I think I found in Western Australia on the night of July 17th–18th, 1935. There is reason to hope that my experience was wholly or partly an hallucination—for which, indeed, abundant causes existed. And yet, its realism was so hideous that I sometimes find hope impossible. If the thing did happen, then man must be prepared to accept notions of the cosmos, and of his own place in the seething vortex of time, whose merest mention is paralysing. He must, too, be placed on guard against a specific lurking peril which, though it will never engulf the whole race, may impose monstrous and unguessable horrors upon certain venturesome members of it.


A Miskatonic professor suddenly adopts an entirely new personality for 5 entire years, after which his original personality abruptly resurfaces. His subsequent dreams seem to imply that he had been the victim of an unsanctioned alien identity exchange. 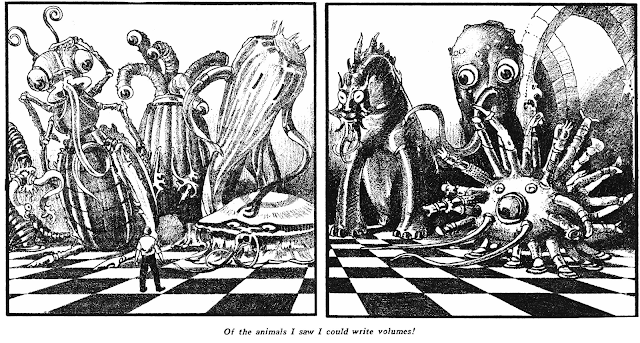 
They seemed to be enormous iridescent cones, about ten feet high and ten feet wide at the base, and made up of some ridgy, scaly, semi-elastic matter. From their apexes projected four flexible, cylindrical members, each a foot thick, and of a ridgy substance like that of the cones themselves. These members were sometimes contracted almost to nothing, and sometimes extended to any distance up to about ten feet. Terminating two of them were enormous claws or nippers. At the end of a third were four red, trumpet-like appendages. The fourth terminated in an irregular yellowish globe some two feet in diameter and having three great dark eyes ranged along its central circumference. Surmounting this head were four slender grey stalks bearing flower-like appendages, whilst from its nether side dangled eight greenish antennae or tentacles. The great base of the central cone was fringed with a rubbery, grey substance which moved the whole entity through expansion and contraction.

There was a mind from the planet we know as Venus, which would live incalculable epochs to come, and one from an outer moon of Jupiter six million years in the past. Of earthly minds there were some from the winged, star-headed, half-vegetable race of palaeogean Antarctica; one from the reptile people of fabled Valusia; three from the furry pre-human Hyperborean worshippers of Tsathoggua; one from the wholly abominable Tcho-Tchos; two from the arachnid denizens of earth’s last age; five from the hardy coleopterous species immediately following mankind, to which the Great Race was some day to transfer its keenest minds en masse in the face of horrible peril; and several from different branches of humanity.

I talked with the mind of Yiang-Li, a philosopher from the cruel empire of Tsan-Chan, which is to come in A.D. 5000; with that of a general of the great-headed brown people who held South Africa in B.C. 50,000; with that of a twelfth-century Florentine monk named Bartolomeo Corsi; with that of a king of Lomar who had ruled that terrible polar land 100,000 years before the squat, yellow Inutos came from the west to engulf it; with that of Nug-Soth, a magician of the dark conquerors of A.D. 16,000; with that of a Roman named Titus Sempronius Blaesus, who had been a quaestor in Sulla’s time; with that of Khephnes, an Egyptian of the 14th Dynasty who told me the hideous secret of Nyarlathotep; with that of a priest of Atlantis’ middle kingdom; with that of a Suffolk gentleman of Cromwell’s day, James Woodville; with that of a court astronomer of pre-Inca Peru; with that of the Australian physicist Nevil Kingston-Brown, who will die in A.D. 2518; with that of an archimage of vanished Yhe in the Pacific; with that of Theodotides, a Graeco-Bactrian official of B.C. 200; with that of an aged Frenchman of Louis XIII’s time named Pierre-Louis Montmagny; with that of Crom-Ya, a Cimmerian chieftain of B.C. 15,000; and with so many others that my brain cannot hold the shocking secrets and dizzying marvels I learned from them. 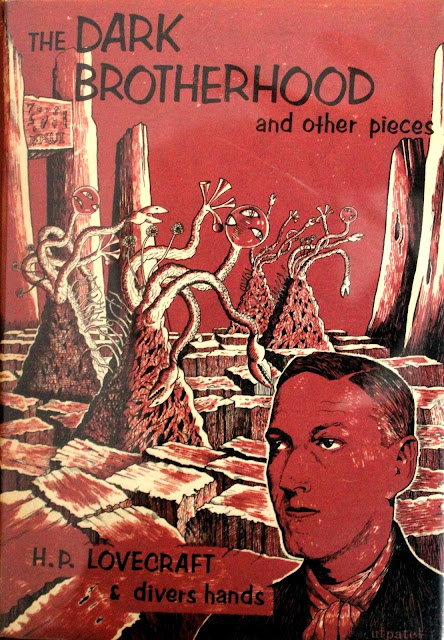 According to these scraps of information, the basis of the fear was a horrible elder race of half-polypous, utterly alien entities which had come through space from immeasurably distant universes and had dominated the earth and three other solar planets about six hundred million years ago. They were only partly material—as we understand matter—and their type of consciousness and media of perception differed wholly from those of terrestrial organisms. For example, their senses did not include that of sight; their mental world being a strange, non-visual pattern of impressions. They were, however, sufficiently material to use implements of normal matter when in cosmic areas containing it; and they required housing—albeit of a peculiar kind. Though their senses could penetrate all material barriers, their substance could not; and certain forms of electrical energy could wholly destroy them.

The irruptions of the Elder Things must have been shocking beyond all description, since they had permanently coloured the psychology of the Great Race. Such was the fixed mood of horror that the very aspect of the creatures was left unmentioned—at no time was I able to gain a clear hint of what they looked like. There were veiled suggestions of a monstrous plasticity, and of temporary lapses of visibility, while other fragmentary whispers referred to their control and military use of great winds. Singular whistling noises, and colossal footprints made up of five circular toe-marks, seemed also to be associated with them.

It was evident that the coming doom so desperately feared by the Great Race—the doom that was one day to send millions of keen minds across the chasm of time to strange bodies in the safer future—had to do with a final successful irruption of the Elder Beings. Mental projections down the ages had clearly foretold such a horror, and the Great Race had resolved that none who could escape should face it. That the foray would be a matter of vengeance, rather than an attempt to reoccupy the outer world, they knew from the planet’s later history—for their projections shewed the coming and going of subsequent races untroubled by the monstrous entities. Perhaps these entities had come to prefer earth’s inner abysses to the variable, storm-ravaged surface, since light meant nothing to them. Perhaps, too, they were slowly weakening with the aeons. Indeed, it was known that they would be quite dead in the time of the post-human beetle race which the fleeing minds would tenant. Meanwhile the Great Race maintained its cautious vigilance, with potent weapons ceaselessly ready despite the horrified banishing of the subject from common speech and visible records. And always the shadow of nameless fear hung about the sealed trap-doors and the dark, windowless elder towers.

Had I once veritably talked with minds from reachless corners of time and space, learned the universe’s secrets past and to come, and written the annals of my own world for the metal cases of those titan archives? And were those others—those shocking Elder Things of the mad winds and daemon pipings—in truth a lingering, lurking menace, waiting and slowly weakening in black abysses while varied shapes of life drag out their multimillennial courses on the planet’s age-racked surface?

I do not know. If that abyss and what it held were real, there is no hope. Then, all too truly, there lies upon this world of man a mocking and incredible shadow out of time. 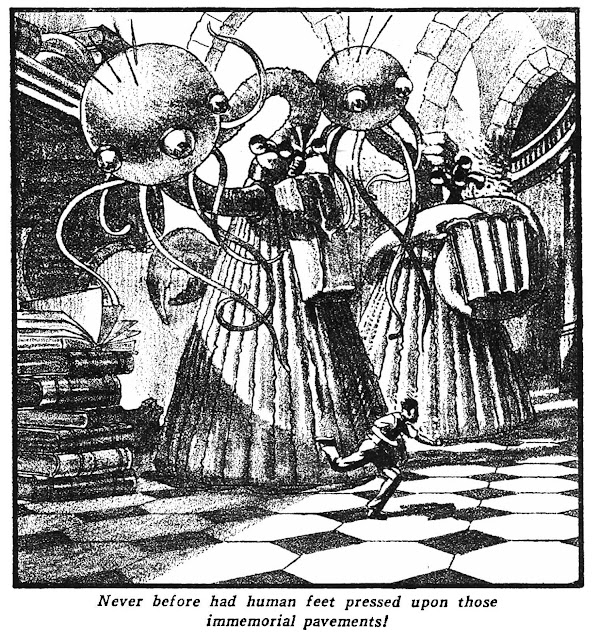 
No eye had seen, no hand had touched that book since the advent of man to this planet. And yet, when I flashed my torch upon it in that frightful megalithic abyss, I saw that the queerly pigmented letters on the brittle, aeon-browned cellulose pages were not indeed any nameless hieroglyphs of Earth’s youth. They were, instead, the letters of our familiar alphabet, spelling out the words of the English language in my own handwriting.

Follow'd by "The Haunter Of The Dark".